AirPods Pro drop to $180, plus the rest of the week’s best tech deals 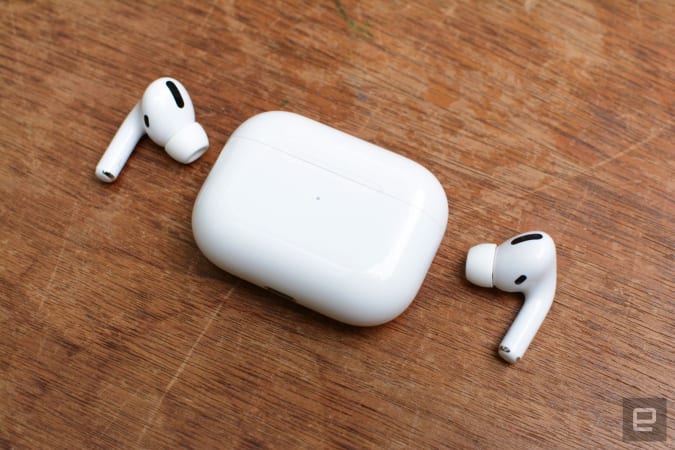 All-Star Matty Beniers to miss next 2…

This week was a good one for those holding out for discounts on Apple gadgets. Most AirPods models remain on sale at Amazon, so you can grab the second-gen earbuds for only $100 or the latest AirPods Pro for $180. The 2021 Apple TV 4K is also on sale for $160, or $20 off its normal price. Elsewhere, GOG.com’s New Year sale has discounted hundreds of titles and you can still pick up a few Roomba robot vacuums for hundreds of dollars less than usual. Here are the best tech deals from this week that you can still get today.

The AirPods Pro are 28 percent off, bringing them down to $180. These updated buds have the MagSafe charging case and we liked them for their good sound quality, solid ANC and improved fit.

Apple’s second-generation AirPods are down to $100, and that’s only $10 more than they were on Black Friday. While the third-gen buds fix some issues that these have, the original AirPods remain a good option for those on a budget. We gave them a score of 84 for their improved wireless performance, decent sound quality and good battery life.

A few colors of the high-end AirPods Max are $100 less than usual, bringing them down to $449. These cans earned a score of 84 for their excellent, balanced sound, strong ANC and good battery life.

The latest Apple TV 4K is on sale for $160, or $20 off its normal price. While the 2021 version isn’t drastically different from the previous model, its new Siri remote is a big selling point. We gave it a score of 90 for its speedy performance, HomeKit integration and the easy of use that comes with the improved Siri remote.

A few colors of Apple’s iPad Air are on sale for $539, or $60 less than usual. We gave this tablet a score of 90 for its speedy performance, fast WiFi, updated design with USB-C and healthy battery life.

GOG’s New Year sale knocks up to 90 percent off popular titles, making it a good time to pick up a few that will help carry you through the winter months. Key among them are Cyberpunk 2077 for 50 percent off, The Witcher 3: Wild Hunt for 80 percent off, Control Ultimate Edition for only $12 and more.

The new Roomba j7+ is $250 off right now and down to $599 at both Amazon and Wellbots. The higher-end Roomba s9+ is also $250 and down to $850. The former just came out at the end of last year and has 10x the suction power of a standard Roomba plus advanced obstacle avoidance, which means it will avoid things like pet poop more easily than other models. The s9+, on the other hand, has 40x suction power and a more corner-friendly design. Both also support automatic emptying and come with clean bases, too.

The Roomba 694 is down to $179, or $95 off and a return to its record-low price. It earned a spot in our best budget robot vacuums guide thanks to its strong cleaning power, on-device button controls and handy companion mobile app.

Fitbit’s Charge 5 is on sale for a record low of $120 right now. We gave the fitness tracker a score of 82 for its large, full-color display, built-in GPS, standard Fitbit Pay and long battery life. The Fitbit Sense smartwatch is also on sale for $100 less than usual, bringing the price down to $200.

All Eero 6 WiFi packs are on sale right now, so you can one for as low as $90. The three-pack of routers is down to $244 while the three-pack with one router and two extenders has been discounted to $195. This system supports WiFi 6, up to 5,000 square feet of coverage and it has a built-in Zigbee smart home hub.

Microsoft’s Elite Wireless Series 2 controller for Xbox remains on sale for $140, or $40 less than usual. If you want to treat yourself (or someone else) to a fancy gaming accessory, this is a good option. It comes with six thumbsticks, four paddles, two D-pads, a charging dock, a carrying case and a USB-C cable, and its battery can last up to 40 hours on a single charge.

The Galaxy Buds 2 are down to $100 right now, or $50 off their normal price. We gave them a score of 84 for their improve sound quality, adjustable ambient sound mode, comfortable design and support for wireless charging.

Samsung’s latest smartphone, the Galaxy S21 FE, is officially available and starting to ship and Amazon throws in a $100 gift card if you order the handset through the online retailer. We briefly tested the FE at CES 2022 and called it “last year’s flagship without the frills,” and it includes a 5-nanometer processor, a 120HZ display, a 32-megapixel front-facing camera, a larger battery and more.

The Samsung T7 Touch SSD in 1TB is down to a record low of $140 right now. That’s even better than the price it was during the holiday shopping season last year. We like the drive’s compact design, fast speeds and built-in fingerprint reader for extra security.

Engadget readers can get a total of two free audiobooks when signing up for Libro.fm, the audiobook subscription service that supports local bookstores. Similarly to Audible, a Libro.fm membership costs $15 per month and gives you one audiobook credit per month, plus 30 percent off any audiobooks you buy á la carte.

Ultraloq’s U-Bolt Pro smart lock with its WiFi bridge is $45 off when you use the code ENGADGET45 at checkout, bringing it down to $154. This model gives you six different ways to unlock your door including a fingerprint sensor, a personal numerical code, an e-key or using the companion mobile app. And with the included bridge, you can control the lock from anywhere, allowing you to remotely unlock or lock your door at any time or give digital keys to your loved ones.

Through January 31, you can get 40 percent off Master & Dynamic’s MW07 Plus earbuds when you use the code TAKE40 at checkout. This sale fixes one of our main gripes with these buds — their high price tag. We gave them a score of 86 for their great sound quality, reliable onboard controls and 10-hour battery life.

Hisense’s 55-inch Quantum Dot 4K TV is 30 percent off and down to just under $600. It packs a lot of value into a relatively affordable TV — the set supports a 120Hz native refresh rate, Dolby Vision and Atmos, 1,000 nits of peak brightness and Game Mode Pro, the latter of which makes use of HDMI 2.1, low latency mode, variable refresh rates and more.

A bunch of Garmin smartwatches are $50 at Wellbots when you use the code ENGADGET50 at checkout. Key among them are the Venu 2 for $350 and the Lily for $150. The former has a number of advanced features like a pulse ox sensor, Garmin Pay and a built-in GPS, while the latter is more affordable and stylish to boot.

Riding along in Ford’s F-150 Lightning