The NFC South being what it is this year, the Panthers have lived in this weird, no man’s land that exists between sort of staying in contention in the division while also remaining in the mix for a top-5 draft pick.

But for an interim coach trying to remove that label and players who haven’t sniffed the playoffs since 2017, the focus is on trying to win the division, no matter how long the odds. The Panthers currently have a 10 percent chance of doing so, according to The New York Times’ playoff simulator.

Still, Panthers linebacker Shaq Thompson hasn’t given up the fight.

“It’s about pride. We want to finish. With all these (NFC South) teams losing, we can be right there,” Thompson said last week. “We’re still in this.”

If the Panthers are going to make a 2014-like, late-season push to win a bad division, here are five things they have to do over their final five games after the bye week.

That 2014 Panthers’ team, which counted current interim coach Steve Wilks among its assistants, overcame a two-month winless stretch by winning its last four games to capture the NFC South with a 7-8-1 record. These Panthers have yet to win two games in a row.

They also haven’t won on the road (0-5) or beaten a team with a winning record. If they’re going to make a run, knocking off Seattle for a modest two-game winning streak would be a good place to start. The Seahawks (7-5) came from behind Sunday to beat the Rams 27-23 on a touchdown pass from Geno Smith to DK Metcalf with 36 seconds left.

Seattle’s Lumen Field is one of the toughest places to win in the NFL. Since the stadium opened in 2002, the Seahawks have a home record of 112-53, the league’s fifth-best mark over that span. Seattle had only three losing seasons in its first 20 years at Lumen Field, though one of those came last year.

Thompson, who played in Seattle at the University of Washington, said the Seahawks’ game could set the tone for the Panthers’ closing stretch.

“We’ve gotta get a win on the road. That’s the biggest thing. We’ve gotta stack back-to-back wins, that’s the next-biggest thing,” Thompson said. “Going out there playing them, it’s gonna be a huge game for us in all aspects. We’ve just gotta find a way to get it done. It’ll be a better flight with a win instead of a loss.”

Or more specifically, the big guys up front. “I think that’s our strength right now is the offensive line,” Wilks said, “and they continue to perform well.”

The Panthers put a priority on improving their offensive line, which cycled through an almost unfathomable 13 different combinations in 17 games last season. They signed Austin Corbett and Bradley Bozeman — interior linemen from successful organizations — and drafted former N.C. State mauler Ikem Ekwonu with the No. 6 pick.

This year the Panthers have had just two offensive line combinations, with Bozeman taking over at center in Week 7 after Pat Elflein went down with a season-ending hip injury. The Panthers have given up 26 sacks through 12 games after allowing 52 last season, the fifth-most in the league.

But the line has really forged an identity with its physical run blocking, which has allowed D’Onta Foreman to get downhill and hit the 100-yard rushing mark in four of six games since Christian McCaffrey was traded.

The Panthers have stayed mostly healthy up front, and even have veteran Cam Erving and rookie Cade Mays getting into the act as extra blockers.

“Our offensive line is rolling right now. Those guys are tough and there’s not a whole lot of defenses that want to go out against those guys,” quarterback Sam Darnold said. “Not only our offensive line, but our running backs, our tight ends, our receivers, the way they are blocking. So our whole run game is setting up for the pass game.” 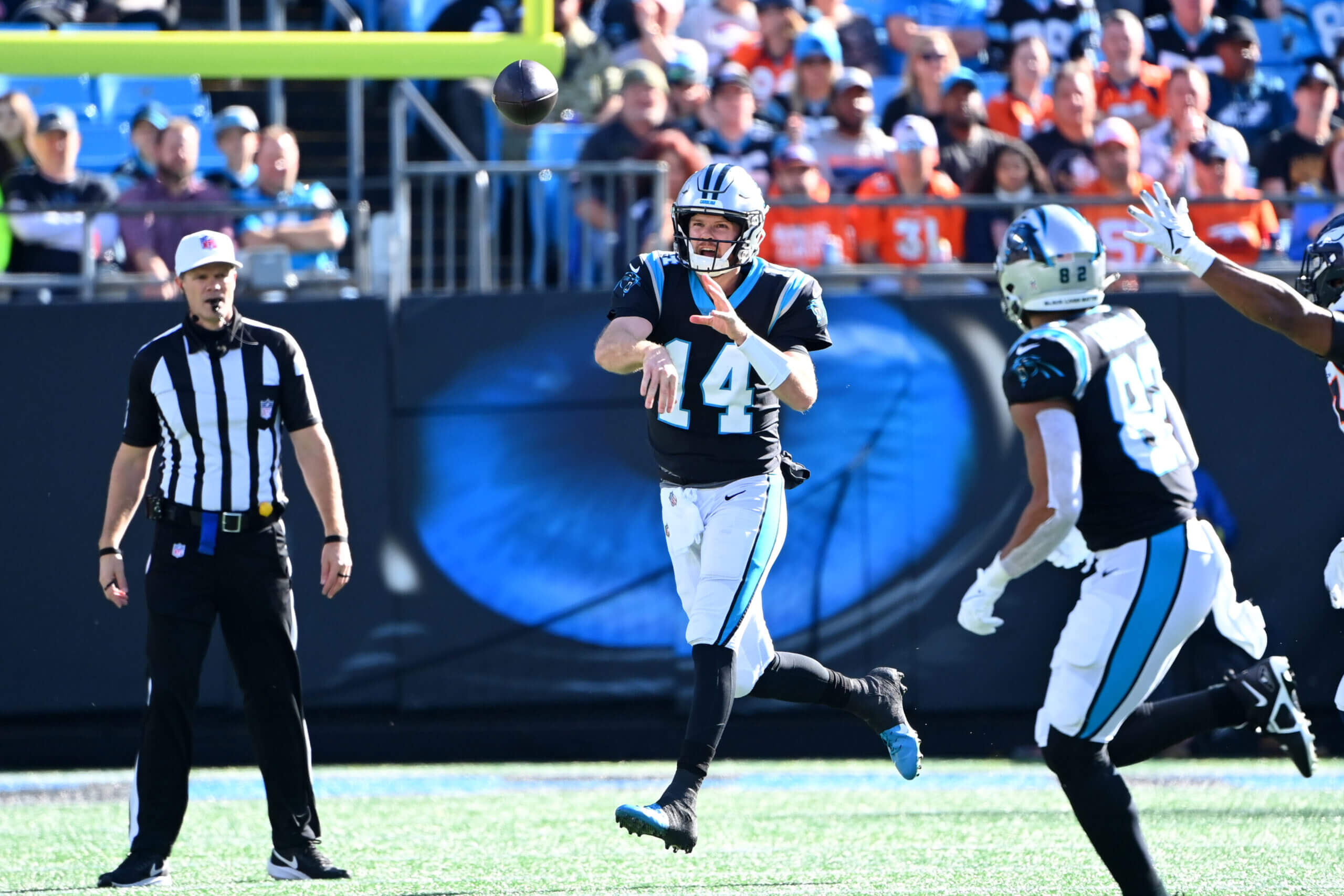 Darnold never really had a chance to win the preseason competition, which was heavily stacked in Baker Mayfield’s favor after Matt Rhule convinced the other decision-makers to trade for Mayfield. Darnold became an afterthought after injuring his ankle in the final exhibition against Buffalo.

But inconsistent play by Mayfield and a high ankle sprain to P.J. Walker prompted Wilks to give Darnold a look against Denver, and the former Jet turned in a solid game in the 23-10 victory. Darnold only attempted 19 passes against the Broncos and completed just 57.9 percent of them for 164 yards.

But he avoided the big mistake that has been his bugaboo and finished with his highest passer rating (103.8) in three years. And though the Panthers didn’t take many shots downfield, Darnold made the most of them, which is something the offense had lacked, particularly with Mayfield behind center.

Offensive coordinator Ben McAdoo has to look for his spots to stretch the field to keep defenses from bringing safeties up in the box to combat Foreman and the run game. Foreman was glad to see Darnold play well.

“I think a lot of us have been through things, so when you get that opportunity, you can’t look back. You got to go and make the best of it,” Foreman said. “That’s what we all try to do when we get those opportunities. I’m proud of him. He played a great game and got us another win.”

The Panthers entered Sunday’s games tied for 26th with a minus-4 turnover margin. Of the 11 teams with negative turnover margins, Kansas City was the only one with a winning record.

Despite playmakers like edge rusher Brian Burns and linebacker Frankie Luvu, the Panthers just don’t come up with many takeaways. They forced just 16 turnovers in 2021 (tied for 26th) and have 12 takeaways this year (tied for 21st entering Sunday).

The good news is that the Panthers have cashed in on their takeaways, notching touchdowns on 25 percent of them — thanks to scores by defensive end Marquis Haynes, cornerback Donte Jackson and Luvu. Only Arizona had more defensive touchdowns (5) through Sunday’s games than Carolina, which was tied with New England, Washington and Buffalo with three.

The bad news: Jackson is out for the season after tearing his Achilles, and the Panthers haven’t had any other edge rushers step up to tag-team with Burns, at least not at the level that Haason Reddick performed in 2021.

Wilks, who began the season as the secondary coach, is confident his players have the ability to force more fumbles and make more plays on the ball in the secondary. “No question they do,” he said. “The talent level that we have back there, we’ve just gotta go out and execute and perform.”

5. Continue to use Johnny Hekker as a weapon

The Panthers broke out a fake punt to grab early momentum against the Broncos, and could always dial up a fake in which Johnny Hekker, a high school quarterback, throws the ball. But the Panthers don’t want to get too cute with Hekker because he’s such a force in field position, something the defensive-minded Wilks knows all too well.

Hekker, a member of the NFL’s All-Decade team while with the Rams, was the leading vote-getter among punters in the first round of Pro Bowl balloting. Heading into this weekend’s games, Hekker led the league with 30 punts downed inside the opponent’s 20-yard line, and was tied for fifth with eight inside the 10.

Hekker’s game against Denver was a microcosm of his season. He averaged 51.0 yards on five punts, four of which were downed at or inside the Broncos’ 15.

Hekker fits perfectly into how Wilks wants to try to win games, controlling the clock and field position while keeping the defense well-rested.