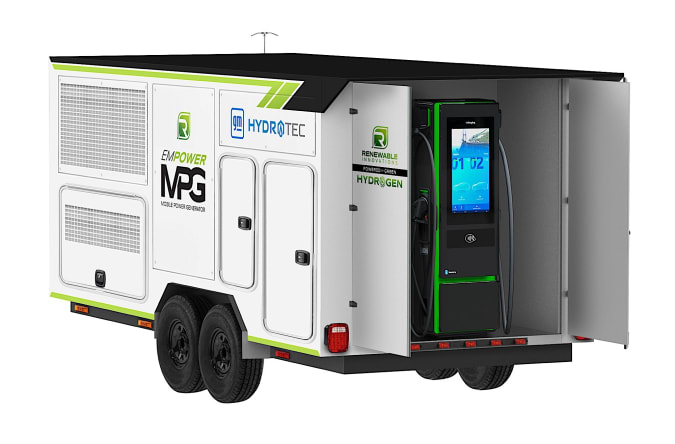 Automakers have been pursuing the dream of hydrogen fuel cell vehicles for decades — who wouldn’t want a car that runs on renewable hydrogen and only emits water vapor? But many challenges, from designing cars that can easily hold the fuel, to setting up reliable hydrogen distribution, have made it difficult to turn that dream into a reality. But what if you used those fuel cells to set up a remote EV charging station, or to replace a traditional gas or diesel generator for a large camp? That’s what GM is planning to do with its HYDROTEC fuel cell technology, the company announced today.

GM’s Mobile Power Generators, or MPGs, are pretty self descriptive: they’d basically let you bring large amounts of electricity anywhere without burning fossil fuels, or expanding a local power grid. It could be useful for concerts, movie sets, or neighborhoods that frequently lose power. (In my town outside of Atlanta, almost everyone owns a gas generator to deal with storm-related outages.)

The announcement also makes plenty of sense for GM, as it’s already bringing its fuel cell technology to trucking, aerospace and rail partners. The company says the MPGs will be able to spit out 60 to 600 kilowatts without producing much noise or heat.

GM plans to show off an MPG-powered EV charging station in the middle of 2022, a project co-funded by the Michigan Economic Development Corporation and the U.S. Army. Additionally, the California Energy Commission is exploring how MPGs could help provide energy during power shutdowns. GM is also working together with Renewable Innovations to build the EMPOWER rapid charger, which could deliver fast EV charging to existing stations without the need for huge infrastructure improvements. Taking things to an even more extreme level, there’s a large MPG implementation that could potentially power large military camps and heavy-duty equipment. (And as a bonus, those camps can actually use the water the MPG emits.)

While it’ll likely be years before MPGs can actually deployed, it’s heartening to see GM explore uses for fuel cells outside of cars. Battery-powered EVs have evolved so quickly that hydrogen-powered cars don’t have much of a future (sorry, Toyota). So it’s about time we start considering other ways fuel cells could help.

Senate Weighs Bill to Protect Satellites From Getting Hacked