To celebrate 30 years of the Premier League, The Athletic is paying tribute to the 50 greatest individual performances in its history, as voted for by our writers. You can read Oliver Kay’s introduction to our Golden Games series (and the selection rules) here – as well as the full list of all the articles as they unfold.

Picking 50 from 309,949 options is an impossible task. You might not agree with their choices, you won’t agree with the order. They didn’t. It’s not intended as a definitive list. It’s a bit of fun, but hopefully a bit of fun you’ll enjoy between now and August.

The sound was loud and clear from the away end. “ATTACK, ATTACK, ATTACK ATTACK ATTACK” the travelling fans screamed, sounding absolutely furious that their team were not pouring forwards in search of that goal they demanded.

“These lot are there for the taking,” they seemed to cry. “Why will you not show some positivity and bloody well GO FOR IT?”

It’s a common sentiment. The difference, in this case, being that the away team involved were Manchester United, it was 1999, they were playing Nottingham Forest, the board had just gone up for stoppage time and the score was 6-1 with three of their strikers having bagged a brace apiece.

Still, United are nothing but obedient, so they went on to score twice more, with one of those strikers grabbing both — in the process becoming the first, and to date only, Premier League player to score four times having come on as a substitute.

The Forest players, already demoralised by a combination of their impending relegation and having Ron Atkinson as their manager, stared into the mud like Vietnam veterans, their Saigon being the City Ground six-yard box, desperately hoping for a chopper to fly in and rescue them.

And there, bouncing the match ball on his hand at full-time, a giddy grin on a face that looked 14 years old on a rough day, was Ole Gunnar Solskjaer, the architect of their (latest) humiliation.

Who remembers his 4 goals in 19 minutes against Nottingham Forest 20 years ago? 👏👏👏pic.twitter.com/FaLiD2AWs4

There was of course some arch humour in the United fans’ calls for their boys to pile on the misery, but it did speak to their attitude at the time. People always talk about the relentlessness of Sir Alex Ferguson’s side, but usually in the context of coming back to secure late victories. Here was proof that, even when a comprehensive victory was not just in the bag but zipped up, padlocked and checked in, they always wanted more, more, more.

And actually, those last two goals might have proved crucial in the title race. United won the Premier League by a single point, but were also only one ahead of Arsenal’s goal difference: had the Gunners, for example, drawn their penultimate Premier League fixture against Leeds rather than lost, then those stoppage-time strikes would have been vital, rather than just a trivia question.

Speaking of trivia questions: which player has the most goals as a substitute in Premier League history?

If you said Solskjaer then apologies — we have led you down the garden path and the big QI klaxon has sounded. Solskjaer may be the most famous replacement of the last 30 years or so, but the player to actually score the most times having come off the bench is Jermain Defoe.

Defoe scored 24 goals (three ahead of second-placed Olivier Giroud) from 149 substitute appearances across a 19-year English top-flight career. Then comes Javier Hernandez with 19, before a three-way tie for fourth with 17 goals, between Daniel Sturridge, Kanu and the man himself, Solskjaer.

Of the top 10 with the most goals, Solskjaer is the most prolific in terms of minutes spent on the pitch: he scored once every 87.9 substitute minutes, but he doesn’t have the best overall minutes-to-goals ratio. According to figures provided by Opta, of the Premier League players with a minimum of 30 substitute appearances, it’s Michy Batshuayi who comes out on top, his nine goals coming every 73.2 minutes.

Is there a pattern with those names? Sort of. Except for Nevland, who is the outlier many respects, they all scored their goals at big clubs who had a variety of talented strikers. Not only would they have been extra motivated to impress their respective managers so they could get more game time, but they will also mostly have been coming on late in games against opponents who probably will have been battered for the previous 80-odd minutes.

Take Remy’s six goals from the bench: all for Chelsea, against Swansea, the third in a 3-0 cruise against Tottenham, then Hull and two against Sunderland. The exception was against eventual champions Leicester in 2015-16, meaning he had the honour of scoring the last goal of Jose Mourinho’s second spell at the club.

Does it take a certain type of striker to be a successful substitute, though? Defoe has spoken about forensically watching defenders while he was on the bench, looking for areas of weakness or habits he could exploit, and while at Rangers he would tell younger forwards to do the same.

It was similar with Solskjaer. Sir Alex Ferguson wrote in his autobiography: “In games, sitting on the bench, and in training sessions, he would make notes, always. So by the time he came on, he had analysed who the opponents were, what positions they were assuming. He had those images all worked out. The game was laid out for him like a diagram and he knew where to go and when.” 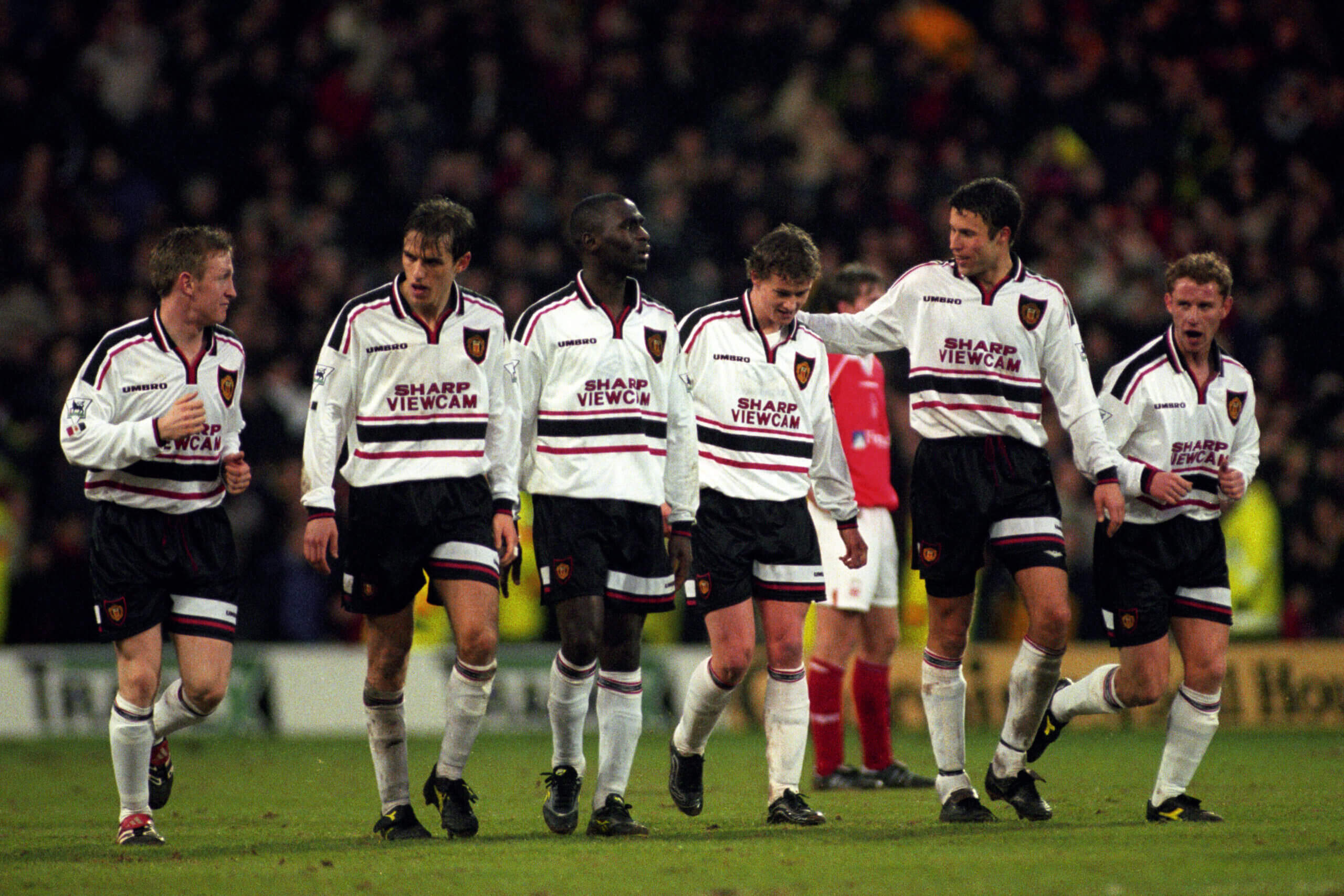 In response to that, Solskjaer himself told Josimar Magazine: “I probably didn’t analyse the whole game. I had to think about myself, how can I do the most damage to the opposition if I come on? I sat there and I studied football games but I didn’t exactly analyse their strikers. Thierry Henry could do whatever he wanted as far as I was concerned — that was Jaap Stam’s problem. Instead, I would pay attention to what the defenders and full-backs were doing wrong.”

And then in an interview with The Daily Mail in 2011, he said: “I do think I had an advantage of watching the game and thinking tactically, but the big thing was that I was mentally ready to come on. Some players are too selfish and think, ‘If he’s not starting me I can’t be bothered’. I never had that sulk. I always felt privileged to have the career I had.”

The 1998-99 season was the one that crystallised the idea of Solskjaer as the most super of super subs. In January, he came off the bench to score a last-minute winner against Liverpool in the FA Cup fourth round, adding to goals against Brondby and West Ham earlier in the season. A month later was the Forest game and then the Champions League final.

The sight of Solskjaer limbering up became a harbinger of doom in the minds of the opposition. “It had an effect on them,” he told FourFourTwo in 2016, “because it became a myth that I scored every time I came on.”

Whether the main reason for his four goals at the City Ground was down to the myth of Ole, or just the fact that Forest were catastrophically crap and heading for an ignominious relegation, is up for debate. Either way, Solskjaer delivered a kick in Forest’s collective swingers as they fell to the ground.

With the score at 4-1 and a demoralised Forest looking like they’d rather be anywhere else, Solskjaer was on the touchline, casting furtive glances towards the dugout the whole time. He looked like a dog behind a locked gate who knew there was a particularly juicy bone on the other side of it.

“It was Steve McClaren’s first game as assistant manager,” Solskjaer told FourFourTwo, “and Jim Ryan, the first-team coach, said: ‘You’re going to come on, Ole. We’re winning 4-1 so there’s no need to do anything stupid — just keep the ball’. I thought: ‘Yeah, right!’. I had a chance to prove myself to the new assistant manager — I was never going to just keep hold of the ball.”

He took 31 touches in that time, mostly neat lay-offs as he dropped deeper from his forward position to link play, one clearance as he went back to help his defence, and then the small matter of the four goals.

First goal – 79 minutes, 20 seconds
Nicky Butt and Hugo Porfirio clash in midfield, and everyone seems to stop except David Beckham, who passes to Gary Neville on the overlap. He crosses in low and Solskjaer is there at the back post to stab into an empty net. Forest keeper Dave Beasant — who actually played quite well in the first half — doesn’t so much dive to try stopping it, rather crashes to the ground like an inexpertly felled tree.

Second goal – 87 minutes, three seconds
Beckham picks it deep on the right and pings a long ball over the top to Solskjaer, who tries to chip Beasant. The Forest keeper beats it down, but it falls straight to Solskjaer and he flicks it around the now-floundering keeper and thumps it into the top corner from the right edge of the box. As open goals go, it’s one with a high difficulty tariff.

Third goal – 90 mins 45 seconds
As the United fans demand their team attacks, Paul Scholes plays a one-two with John Curtis and moves into space about 35 yards out. One Forest centre-back comes out to close him down, another is drawn away by the run of Andy Cole leaving Solskjaer free on the left side of the box. Scholes chips a ball at about thigh high, which Solskjaer has to jump to control, does so, it bounces and he volleys past Beasant.

Fourth goal – 93 minutes, 10 seconds
Butt cuts it back from the right side of the box with United players giddily queueing up to feast on the Forest corpse. It goes behind Cole, Scholes takes a massive swing and it sort of skids off his toe, running straight to Solskjaer who tucks it under Beasant.

As a final indignity for Forest, that goal meant United had broken the record for the biggest away victory in Premier League history, held to that point by… Nottingham Forest. It would stand until Leicester beat Southampton 9-0 in 2019.

Forest manager Ron Atkinson attempted to deal with the humiliation with some classic humour. “Did he get four? It’s a good job they didn’t put him on any earlier. In a nutshell, we got murdered our there today. We said beforehand that we’d be bright and attractive, and there you are: a nine-goal thriller.”

In his first autobiography, Ferguson called it “devastation on the grand scale”. “He’s a very good substitute,” he said after the game, “because he picks up the pace of the game so quickly. Not many people can do that.

“If I ever feel guilty about the teams I pick, it invariably centres around him. He really deserves better. But the fact is he is better than anyone else at the club as a substitute. He can come on and not be disturbed by it; he finds the flow easily.”

“You would have thought Andy and I had done all that was needed,” said Dwight Yorke, who shared United’s other goals with Andy Cole. “Then Ole came on and scored four. That’s beautiful.”

McClaren strolled into the dressing room at full-time and said: “Not bad lads — is it like this every week?”

It wasn’t, but the sight of Solskjaer limbering up, with the reputation that he had justifiably earned, made it feel like it could be.