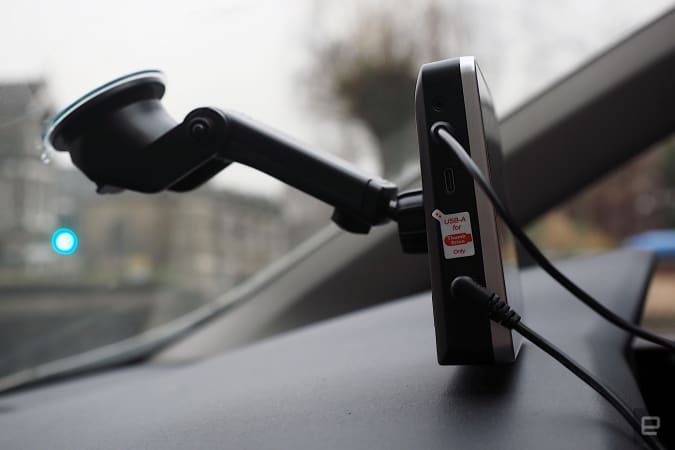 There are plenty of cars that lack the technology to leverage CarPlay or Android Auto, including my own 2012 Toyota Scion iM. And there are plenty of people who lack the desire or ability to swap out their own head units to something that supports the new standards, including myself. So it’s me, really, that sits in the middle of the venn diagram of consumers that Car and Driver is targeting with its Intellidash and Intellidash Pro standalone head units.

Hardware wise, the Intellidash and Pro are both chunky, 7-inch displays which are designed to sit on your dashboard. (They are both rebranded versions of Coral Vision’s own display). The major difference between the two is that the vanilla edition requires a wired connection to your phone, while the Pro can operate wirelessly. Now, I’ve been driving around with the Intellidash Pro in my car for the bulk of the holiday season, and I like it a lot.

But, despite that, it’s probably worth launching head-first into the downsides before talking about why I like it. The most obvious of which is that the Intellidash Pro looks like a piece of farm equipment, or worse. It resembles the sort of low-cost GPS units you’d find on sale for three or four times the going rate in the back of a gas station two decades ago. In fact, there are no-brand Android tablets from 2013 that are better-looking than this thing, and thinner, too.

Partly, it’s this size because there’s a lot of gear packed inside, like a microphone, speakers, Sirius XM receiver, FM transmitter and Bluetooth. It’s also got a whole host of jacks for an aftermarket reversing camera, audio out, USB-C and USB-A (for a flash drive). But if you’re just connecting this wirelessly to your phone, you won’t need any of this.

Then there’s the fact that, at the least, you’ll need to route the power and aux-in leads around your dashboard. I didn’t bother, given this was just a short-term loan, but I suspect that fans of cleaner dashboard setups might find it a bit grating. You can tune it to broadcast over FM to your car which is better for cable management but isn’t ideal for audio quality.

It’s also unfortunate that the manufacturers didn’t spend a little more time polishing the default UI. For instance, the home screen icons only run along the bottom quarter of the display, and there’s enough of them that you’d need to scroll to the next page to see the rest. Given the risk that you may need to use this screen when you’re driving, needless busywork is a bad thing.

Jump into the settings menu and you’ll feel like it was previously a Chinese-language original that has been hurriedly localized. Icons are muddy, fonts are hard-to-read and the whole thing needs a good, hard polish to make its UI feel less agrarian. Setting the night mode, for instance, means you’re diving into the last pane of display settings, despite its obvious importance.

I am, of course, nitpicking, and it’s easier to focus on these negatives because the one clear positive is so simple: Stick this in your car and after about two minutes of setup, you’ve got CarPlay (or Android Auto). No longer do you have to relegate your iPhone to the windshield mount, and now you can control your audio and navigation from the homescreen. That’s priceless when you’re on a long solo drive and you haven’t made yourself a playlist of podcast episodes you want to listen to. It’s the convenience you’re paying for, the ease of having to do very little to get this slice of the future into the ossified technology of history.

As for the price, well, the Intellidash Pro is $400, while the non-wireless Intellidash is $350. You’d spend that much, sometimes more, on a unit from Best Buy, albeit with fitting thrown in. Certainly, while it’s another widget on your dashboard, if you’re not sure how long you’re keeping your car, or have multiple cars, then having something you can take from vehicle to vehicle isn’t the worst idea in the world.

Nintendo Switch is $20 off for Amazon Prime members at Woot

Notiomastodon Was an Elephant-Like Giant That Roamed Pleistocene South America