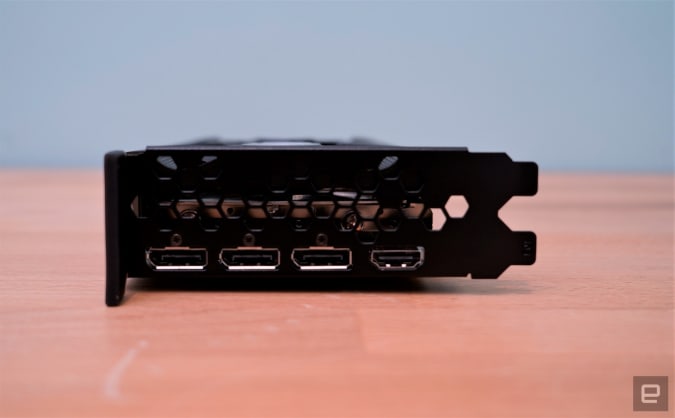 My latest co-op multiplayer obsession is…

What games will Luka Doncic miss?…

Echolocation could give small robots the…

The idea of a $250 graphics card seems like a pipe dream today, when unprecedented demand, scalpers and the global chip shortage have driven GPU prices into the stratosphere. Still, that’s not stopping NVIDIA from trying with the new RTX 3050. It’s the company’s cheapest GPU yet with ray tracing, and it’s meant to take on AMD’s even cheaper Radeon RX 6500 XT, which has a suggested retail price of $200. While it’s unclear if the 3050 will actually sell for $250 once it hits stores, it’ll at least come in less than the RTX 3060, which launched at $329 but now goes for around $1,000 (not a typo) at Newegg and other retailers.

Like NVIDIA’s wildly popular GTX 1050 and its other 50-class GPUs, the 3050 is meant to be an affordable way to reach 1080p/60fps while playing modern games. With newer titles like Control demanding more power from our systems, it makes sense for NVIDIA to finally deliver a budget 30-series entry. The 3050 features 2,560 CUDA cores, a boost speed of 1,777 MHz and 8GB of GDDR6 RAM, putting it well below the 3060’s 3,584 CUDA cores and 8GB of RAM (not to mention its vastly faster memory interface). Still, as a 30-series GPU, it also has ray tracing and tensor cores, allowing it to tap into more realistic lighting, as well as the company’s DLSS technology to boost performance.

NVIDIA is positioning the new card as a major update to the GTX 1650, which had just 896 CUDA cores and no ray tracing or tensor capabilities. (There was no RTX 2050 desktop GPU, though the company surprised us all when it announced a laptop version at CES this year.) The RTX 3050 is also more compelling on paper than the Radeon 6500 XT, which only has 4GB of memory, a much slower memory bus, and only taps into 4 PCIe lanes instead of the typical 16. AMD clearly cut as much as it could to create an inexpensive GPU for entry-level gamers, but that also makes it less future-proof than the slightly more expensive RTX 3050.

During my testing, the EVGA RTX 3050 XC Black GPU (NVIDIA isn’t making any Founder’s Editions this time) was able tackle every game I threw at it in 1080p, even when I cranked up the graphics settings all the way up. It averaged 140fps in Hitman 3’s Dubai benchmark, making it well-suited for 144Hz refresh rate monitors. Bumping the resolution up to 1,440p halved performance to 74fps, which was a significant dip from the 3060’s 110fps average. That higher resolution is definitely playable, but it’s clear the 3050 is best-suited to 1080p gaming, especially if you’re trying to get enough performance to justify a high-refresh rate monitor.

In Destiny 2, the 3050 hit a 90fps average in 1080p and 65fps in 1,440p with the highest graphics settings. Those are decent scores if you want all of the best visual flourishes, but I’d wager many gamers would step some of those settings down for better framerates. I was most impressed with how the GPU handled Control, which is still one of the more demanding games around. It reached 65fps on average in 1080p with maxed out graphics (but no ray tracing). When I flipped on DLSS, which rendered the game at 720p and used AI to upscale it to 1080p, the framerate jumped to a silkier 90fps. And surprisingly enough, it was perfectly playable at 70fps when I turned on medium ray tracing settings along with DLSS. Not bad for a (supposedly) $250 video card!

As for typical benchmarks, like 3DMark’s suite, it’s best you don’t look at those. The 3050 is clearly much slower than the rest of NVIDIA’s lineup, so you’re better off ignoring what you’re missing. What’s important is that it’s an affordable card that can play demanding games well in 1080p, and in some cases it’ll even get you to 1440p. And thanks to its relatively tame performance, it also doesn’t generate much heat or noise. It stayed at a surprisingly cool 60 Celsius under load.

I didn’t have an RTX 6500 XT to compare it to, but judging from the reviews and its specs, you’ll have a hard time reaching any Ultra-level 1080p gaming with that GPU. AMD purposefully hampered its memory to make it less appealing to cryptominers. That plan may have actually succeeded, as its price is now hovering between $250 and $300 on Newegg.

It’ll be interesting to see just how far the RTX 3050’s price jumps after its release. But based on what we know so far, it’s an absolute steal if you can nab it for $250, and for many gamers it’ll be worth paying several hundred more. At the moment, it’s the only way to get an NVIDIA 3000-series card without paying over $1,000.

My latest co-op multiplayer obsession is Raft, the game where you build a raft…

What games will Luka Doncic miss? – AS USA

Echolocation could give small robots the ability to find lost people

Thailand to boycott kickboxing at Southeast Games in Cambodia … –…