‘OlliOlli World’ is a friendly but deceptively difficult skateboarding game 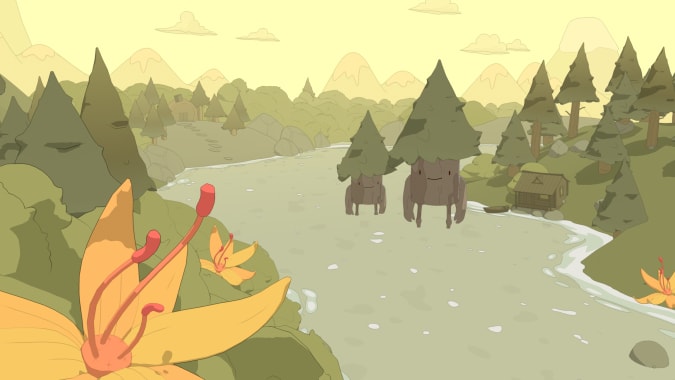 At X Games, Zoi Sadowski-Synnott And…

NFL predictions, picks against the…

OlliOlli and its sequel, OlliOlli 2: Welcome to Olliwood, are notoriously difficult to master. These side-scrolling skateboarding games start out easily enough, but if you want to complete every challenge, get ready to play and replay some levels dozens of times over. It can be infuriating, but also extremely satisfying to pull off just the right combo of tricks and grinds needed for a big score.

I was worried that OlliOlli World, a new direction for the series that arrives on February 8th, was going to dispense with that level of challenge. After playing an extended preview of the game over the last week, I’m no longer concerned. Developer Roll7 has made a game that’s significantly more approachable than the original titles — but one that keeps the twitch-response gameplay and score-chasing highs intact for those who crave them.

For the uninitiated, OlliOlli World is a, 2.5D skateboarding platformer where your character simply has to make it from one end of the course to the other while pulling off as many tricks and combos as possible. That’s the same basic formula as the original games, but the scope of OlliOlli World is much greater. The game is split into five different areas, three of which were playable in my demo. The first one, Sunshine Valley, had close to 20 distinct levels, a handful of which were merely training levels meant to introduce the basics of skating, grinding and pulling off different tricks. But even if you don’t count those levels, there’s far more to explore in OlliOlli World than the two earlier games, each of which had 50 levels total.

There’s a host of ways to challenge yourself as you skate through these levels. For starters, you need to navigate grind rails, gaps, ramps and other obstacles to get to the end before you can progress. In a concession to the game’s history of bruising difficulty, though, levels now have checkpoints — so if you blow it 90 percent of the way through the level, you can try that last segment again. Of course, if you had a huge combo going that got interrupted, you’ll lose out on that opportunity for big points. But this at least makes it easier to learn levels and work on problem spots without having to tackle the entire course again.

But the levels are both extremely well designed and visually interesting, so I was eager to play and replay them until I mastered all the challenges and found as many secrets as I possibly could. The world is populated with colorful and fantastical creatures like walking bananas, smiling trees, giant bees holding signs for you to wall ride on, huge frogs (sometimes riding those giant bees) and, of course, the Skate Godz that you meet at the end of each world.

See, your character is on a quest to become the new Skate Wizard, with the help of a goofy and delightful animated crew, including Chiffon, the one-eyed, pipe-smoking current Skate Wizard who’s ready to retire. To take their place, you’ll need to meet all of the Skate Godz that inhabit the five different zones you can play through. Each level has some banter with your crew as well as people you meet on your journeys, full of ridiculous puns and occasional advice on how to improve your scores or pull off new moves. You can skip it if you want, but it helped me get in the headspace of the gorgeous world of Radlandia.

It’s hard to sum up in words what makes the individual levels in OlliOlli World so compelling, but they mix serious challenge in with moments that let you really get into that elusive flow state, where you’re just pulling off tricks, riding rails and generally tearing through a course without thinking too much about what you’re doing. The music, sound effects, art style, level design and variety of moves you can pull off all contribute to this vibe — and even though the game looks entirely different from its predecessors, the end result is the same: skateboarding bliss.

My skills from the original OlliOlli games translated here, but there are plenty of new things to challenge long-time players. The game isn’t straight 2D anymore, which means there are multiple paths you can discover through many levels, something that seriously adds to replayability and challenge of these levels. Each level has multiple goals you’re presented with at the beginning, and meeting them all will almost certainly require multiple plays, especially as the game goes on and the tracks get more complex.

Indeed, by the time I got about halfway through the third world in the game, I was seriously struggling to check off all of a level’s goals. The good news is you can keep progressing without beating all three challenges, nor are you penalized for using checkpoints, but the game is so well designed that I wanted to keep going back and trying to best my earlier scores and nail those goals.

There are plenty of new moves like grabs to pull off, and quarter-pipes let you change the direction your skater is going in. It sounds simple, but having your skater go right-to-left instead of the opposite really threw me for a loop, but I also audibly cheered the first time I skated into one of those quarter-pipes. They add a whole new dimension to the game that I wasn’t expecting.

It’s also worth mentioning some of the other ways Roll7 made this game more approachable than the earlier ones. Besides the aforementioned checkpoints, it’s a lot harder to wipe out now. Earlier games required you to press a button when landing, or else you’d lose all your momentum as well as the points you accumulated from a trick. Now, you can land without having to worry about that step — but pulling off so-called “perfect” landings increases your speed and score.

The main game is a deep experience, but Roll7 added new features for those who love to chase high scores. Every time you finish a level, you’ll see a rival player’s score that you’re then challenged to best. It’s subtle, just showing your rival’s high score beneath your best score — but these challenges taunted me into playing a few extra rounds to try and beat that challenge. OlliOlli World is smart enough to match you with players of your own skill level, so if your high score tops out at 100,000, you won’t be challenged to beat someone who got 1 million on a level; the rival scores are usually around 20 percent higher than your own best. It’s good encouragement to push yourself even harder through a level.

OlliOlli World also offers daily challenges through the Gnarvana League, which you unlock once you finish the game’s first area. Here, you join a league where you’re pitted against nine competitors who again skate at a similar skill level to you. The levels change every day, and you’re simply trying to put up the best score in your group. As you play, you can get promoted to other leagues, where the courses presumably will get trickier. I’ll readily admit that after putting up a score that put me on top of my group, I kept my eyes on the league throughout the day to see if I’d have to replay it and improve my score to keep that top spot.

Finally, there’s a random level generator that you can use to challenge your friends or strangers to put up their best score. The Gnarvana Portal is extremely simple, letting you pick a level’s “style,” which is based on the five main worlds in the game. You can then choose one of four difficulty levels and set the course’s length. Once it’s generated, you can share that course via an eight-digit postcode. That code lets anyone else try your level, regardless of what platform they’re playing on, and you again compete to see who can put up the highest score. The fun thing is that anyone can try this, so you can give the postcode to a few close friends, or post it online and challenge anyone you want.

For the first time in an OlliOlli game, you can also customize your character to your heart’s content. There are a ton of clothing options, hairstyles, skateboard designs, skin color options and much more here, and you’ll unlock much more as you check off the different challenges each level offers. Unlike the first two games’ single, generic male skater design, you can make a character here that truly fits your personality.

There’s a ton of game here for $30, and the Roll7 team has at least two DLC expansions planned for later this year (both of which are included if you order the $45 Rad Edition). If you have even a passing interest in skateboarding or platformer games, OlliOlli World is absolutely worth your time. It’s deeper, brighter, bigger and more fun than the original games, and I expect it’ll be a hit with hardcore OlliOllli fanatics as well as a much bigger new audience experiencing the thrill of this meditative skating series for the first time.

OlliOlli World will be available on the Switch, PS4, PS5, Xbox Series X/S, Xbox One and PC on February 8th.

Inside the Dungeons & Dragons ‘Monsters of the Multiverse’

At X Games, Zoi Sadowski-Synnott And Tess Coady Prove Australasia Is Taking Over…