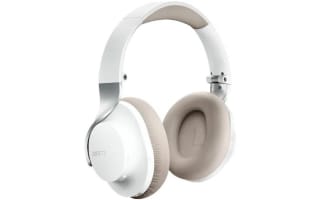 Mid-range headphones are typically an exercise in compromise. In order to reduce prices, companies usually omit a few premium features or opt for cheaper materials. Sometimes there are sacrifices to sound quality or active noise cancellation (ANC) performance. Enter Shure’s Aonic 40: a more affordable wireless model in the company’s noise-canceling lineup and an alternative to the pricier Aonic 50.

At $249, the Aonic 40 is at the top end of what I’d consider mid-range. Thankfully, Shure didn’t cut too many corners when it comes to the feature set. There’s a degree of customization and plenty of tools to worth with. However, the Aonic 40 fails to make an impression in key areas, and needs a bit more polish if it’s going to stand out from the crowd.

Like the Aonic 50 that came before it, the Aonic 40 is mostly black, except for some silver accents where the headband connects to the earcups. There’s also a white version that keeps the silver components but adds tan padding to the earcups and the underside of the headband. Like many other wireless headphones, the folding design of the Aonic 40 allows them to be a compact travel companion. The earcups rotate and fold in towards the headband, so even though the case will take up some space in your bag, it’s at least relatively flat.

The Aonic 40 appears to be an entirely plastic design, but that’s not actually the case. The silver areas are made of aluminum alloy, but they have a flat finish that makes them look less like metal. Shure says the black areas are glass-filled nylon, despite the appearance of plastic. Other headphone companies have pulled this trick, including Bose with its popular QuietComfort line. Shure explains that this material makes the Aonic 40 more durable, but it certainly doesn’t add a premium aesthetic. What’s more, after a couple weeks of what I’d consider light use (barely moving them away from my desk), I’m already seeing light scratches.

Shure did make one design change from the Aonic 50 that allows us to tell the older model apart from its newer sibling. Where the 50 had a visible rotating arm with an elbow, the portion of the 40 that spins is hidden up near the headband. The arms themselves on the Aonic 40 are also curved, twisted to connect the headband to the earcups by running alongside the edge of the earcup.

In terms of comfort, these headphones are just average. I have a big head and the fit is tight. Not oppressively so, but after several minutes I can feel the rings of the earcups pressing into my head. It doesn’t become overbearing, but it’s not exactly enjoyable either. Headphones need to form a tight seal for effective ANC performance. They also need to be comfortable when you wear them for long periods of time.

Like the Aonic 50, Shure went with physical buttons for the on-board controls rather than touch-friendly panels. As such, the Aonic 40 offers a full suite of functionality right on the headphones themselves. The lone button on the left side is for power and Bluetooth pairing. Unlike a lot of the competition, Shure gives you the option to get a battery level check without glancing at its app by double tapping the power button. On the right, there’s a traditional multi-button array with volume controls flanking a centered multi-use key.

The middle button handles play/pause (single press), skipping tracks forward (double press), returning to the previous song (triple press) and summoning a virtual assistant (press and hold). A separate, fourth button on the right earcup toggles between ANC and Environment Mode (ambient sound). Each time you press it, the headphones return to your previous setting for both of those options, which is selected in Shure’s app. You can also bypass them both with a long press on the noise control button.

The Shure Play app is one of the better pieces of headphone companion software I’ve used. There’s a lot available here, and it’s all easy to find. Right up top you get a battery percentage and access to noise control (ANC, Environment Mode and None), along with noise canceling presets and a slider for ambient sound level. While you can’t dial in the ANC precisely, Shure does offer Light, Normal and Max settings. It’s adjustable, albeit not fully customizable. Directly underneath is a guide for button controls, options to tweak prompts/tones, the ability to configure USB connectivity for listening or “conferencing,” battery saver settings and an optional busy light when you’re on a call. That last feature flashes a red light so anyone you’ve notified about it beforehand knows not to disturb you.

The software also houses a more robust equalizer than most headphone apps. Per usual, there’s a smattering of presets, but Shure goes beyond the typical three to five with seven options (Bass Boost, Bass Cut, Treble Boost, Treble Cut, De-ess and Loudness). The company gives you the ability to make your own presets as well, saving them in the list after you build them with the manual EQ tools. You can start from scratch or from one of Shure’s presets, adjusting frequency, gain and bandwidth in addition to moving and plotting points on a sonic curve. For my purposes, Loudness was the best overall setting as it increased clarity for listening at lower volumes. It also made the stock tuning sound better at all times.

With that preset enabled, the Aonic 40 is capable of blasting punchy bass that drones or thumps when a song demands it. There’s also more detail with this preset, as the clarity increases no matter the volume level. Overall, the soundstage isn’t as wide open and songs don’t have the immersive depth that pricer sets offer – especially on heavier music styles. The chaotic metal of Underoath’s Voyeurist and Gojira’s Fortitude are subdued and sound slightly flat unless you’re at full volume. On the other hand, with the delicate acoustic strums on Punch Brothers’ bluegrass masterpiece Hell on Church Street, these headphones really shine. Layered instruments properly convey the airyness of being in the room where five aficionados are absolutely shredding. Similarly, the Aonic 40 highlights the finer details of Navy Blue’s J Dilla-esque hip-hop album Songs of Sage: Post Panic! without sounding overly compressed..

When it comes to noise cancellation, the Aonic 40 does a decent job of blocking out background noise. It’s not on the level of Bose or Sony, but for $250 headphones it gets the job done. The three settings offer options for different scenarios, but I mostly kept it locked on Max. As for Environment Mode, the ambient sound function lets in outside noise just fine. It’s serviceable, but it’s nowhere near as natural sounding as the AirPods Max. Honestly, no other company comes close to what Apple offers in that regard.

Shure promises up to 25 hours of battery life with ANC turned on. I was pleasantly surprised when the headphones hit the 30-hour mark and the app was still showing 19 percent in the tank. This battery test was done over the course of a few days, so the headphones were powered off multiple times while I was trying to drain them completely. Around 30 hours is about the best you can expect from noise-canceling headphones, including Sony’s best-in-class WH-1000XM4. What the Aonic 40 doesn’t have that much of the competition does is automatic pausing. As I mentioned, you can set the headphones to automatically power off at certain intervals if they’re sitting idle, but if you take them off and step away in a hurry, the music continues. However, if you find yourself in a pinch due to this, a 15-minute quick-charge feature will give you five hours of use.

Call quality is another area where the Aonic 40 holds its own – so long as you’re in a quiet place. The headphones won’t make it sound like you’re on speakerphone like a lot of earbuds or headphones tend to do. To me, it’s pretty close to what you get when you hold the phone up to your face. If you enter a noisy plac,e though, things change quickly. The Aonic 40 picks up environmental rumbles too well, like the roar of a white noise machine. On the flip side, the ambient sound mode allows you to hear your own voice while you’re on a call, keeping you from becoming too shouty because you can’t monitor your volume.

At $249, I consider the Aonic 40 to be at the top end of mid-range headphones. They’re not super affordable, but they’re also not as pricey as Shure’s own flagship model or more premium options from the likes of Apple, Bose, Master & Dynamic or Sony. The Razer Opus is a more apt competitor, debuting at $200 in the spring of 2020. Great THX-certified audio, solid ANC performance and a comfy fit left an impression during my review. Plus, Razer is currently selling them for $140, which makes them even more compelling.

If you can live without active noise cancellation, I really like Audio-Technica’s M50x series. The most recent model, the ATH-M50xBT2, arrived with updates like multi-point Bluetooth pairing, Alexa built in and wider audio codec support – all while keeping the trademark design. And at $199, these will also save you some money over the Aonic 40.

That being said, the WH-1000XM4 remains the gold standard for noise-canceling headphones. Sony’s mix of audio quality, ANC performance and nifty features like Speak-to-Chat remains the best you can get, although the likes of Bose and others are catching up. Still, they’re $100 more than the Aonic 40 at full price, but we’ve seen them on sale for $248. If you can catch them at the same price as Shure’s latest model, commit to the 1000XM4.

Shure’s Aonic 40 is a more affordable option in the company’s noise-canceling lineup, offering a host of features and doing some of them well. Impressive battery life, serviceable ANC and a degree of customization are offset by inconsistent audio performance and an overall lack of polish when it comes to finer details like fit and convenience. For those reasons, the Aonic 40 tends to blend into the crowd rather than stand apart.