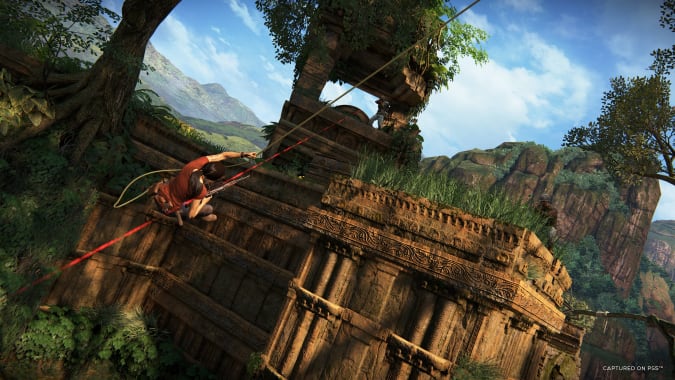 Uncharted has been a tentpole franchise for Sony ever since the first game arrived back in 2007, so it’s not surprising that the games have been remastered for newer consoles over the years. Developer Naughty Dog first brought the original PS3 trilogy to the PS4 in 2015 as The Nathan Drake Collection, improving visual fidelity and frame rates. Now, the company is pulling the same trick with the two PS4 games in the series: Uncharted 4: A Thief’s End and Uncharted: The Lost Legacy.

Uncharted: Legacy of Thieves Collection arrives for the PS5 this Friday, almost five years after Naughty Dog last released a new game in the series. The $50 collection features a number of technical and visual enhancements, but the games themselves are identical to the PS4 versions. I’ve spent the last week or so playing both games in the Legacy of Thieves Collection to see how they hold up and determine who this package is for.

There are three visual modes here, all of which improve over the original PS4 game. A “fidelity” setting keeps the frame rate at 30 fps but renders the games in full 4K resolution. Performance mode, on the other hand, runs the games at 60 fps while making no promises about the exact resolution. Finally, there’s a “Performance+” mode for people with 120Hz TVs — the games run at 120 fps with a locked 1080p resolution.

I don’t have a 120Hz TV, so I can’t say how that mode looked, but both the Fidelity and Performance modes looked simply spectacular. Uncharted 4 was beautiful enough when I played it in 1080p back in 2016; the cold snowy vistas of Scotland and the wild landscapes of Madagascar look even better in 4K with HDR. The improved resolution is also appreciated in the dark, shadowy opening of The Lost Legacy, as well.

Despite how great things looked on Fidelity mode, I spent almost all my time playing the game on Performance, as the improved frame rates simply offer a better gaming experience. I don’t have the most discerning eye, it seems, because I couldn’t notice the resolution difference between Fidelity and Performance, so sticking with the 60 fps mode was a no-brainer. Of course, your mileage and TV will vary. If I was playing on a TV larger than my humble 43-inch model, or through a projection system, I might have found Fidelity mode more valuable.

There are a number of other improvements that make these games feel native to the PS5, as well. First off, the games support the adaptive triggers on the PS5 controller, which adds resistance and a different feel when you’re firing your weapons (something you do frequently in both games). Combined with the improved haptics in the PS5 controller, the two games in Legacy of Thieves feel more immersive than they did on the PS4.

Load times are also blissfully short, thanks to the PS5’s SSD and more powerful hardware. If the game wasn’t already running, it still took less than a minute to load my progress and get back into the adventure. I never really thought about the load times when playing on the PS4, but I went back and confirmed the unsurprising fact that the PS5 is much faster.

As for the games themselves, both A Thief’s End and The Lost Legacy hold up well. They look gorgeous, the stories are engaging and more intricate than the earlier games, and the gameplay is more varied than the original trilogy as well. On the other hand, it remains extremely difficult to reconcile the lighthearted tone of Nathan Drake, the protagonist in A Thief’s End, with the massive body count he racks up throughout the game.

The stakes are high, but Drake is a charming and charismatic adventurer — despite the fact that he’s put in a tough situation, needing to pull off a huge heist to save his brother’s skin, he’s not a deadly serious lead hero. But he is deadly, killing dozens throughout his quest. It’s easy enough to just go where the game takes you and not overthink it, but it’s worth mentioning that six years on, the two sides of Drake still don’t sit particularly well next to each other.

The Lost Legacy puts you in control of another antihero, treasure hunter Chloe Frazer who appeared in Uncharted 2 and 3. It’s the first Uncharted game where Nathan Drake isn’t the main character, and it overall has a bit of a darker tone — Frazer and her companion Nadine Ross are just as lethal as Drake, but it fits their personalities and the story a bit better. While we’re discussing The Lost Legacy, it’s worth pointing out that the game originally sold for $40 and wasn’t intended to have the same scope as Uncharted 4; as such, it’s much shorter (a standard playthrough takes about seven or eight hours).

Putting aside any misgivings about the ludonarrative dissonance in these games (something that’s come up a lot with Naughty Dog’s games), they are fun, beautiful, sprawling adventures. If you haven’t played any Uncharted games before, you could pick up the Legacy of Thieves Collection and get a lot of gaming value for your $50. Sure, you won’t know Drake’s entire backstory, but A Thief’s End fills in the blanks well enough even if you don’t know every detail of his past adventures.

I’m a completionist, so I have slight misgivings about telling someone to jump right into it with the fourth game in a four-part series. I might recommend spending $20 on Uncharted: The Nathan Drake Collection, which is a remaster of the three PS3 games in the series — but Uncharted 4 holds up well enough on its own. As for The Lost Legacy, its protagonists are taking center stage for the first time, so their roles in past games aren’t terribly crucial to the story at hand.

If you enjoyed the original Uncharted trilogy, but somehow missed these games on the PS4, the Legacy of Thieves Collection is a no-brainer. If you’ve played them before, though, it’s a little less clear-cut. Improved frame rates and visual quality are solid updates to bring the games into the PS5 era, but they don’t fundamentally change the experience. That said, Sony is offering the Legacy of Thieves Collection for only $10 if you previously purchased A Thief’s End or The Lost Legacy. For the many people who love the series, that’s $10 well-spent, as these games hold up well — and look and play better than ever on the PS5.

quarespace is getting into video subscriptions