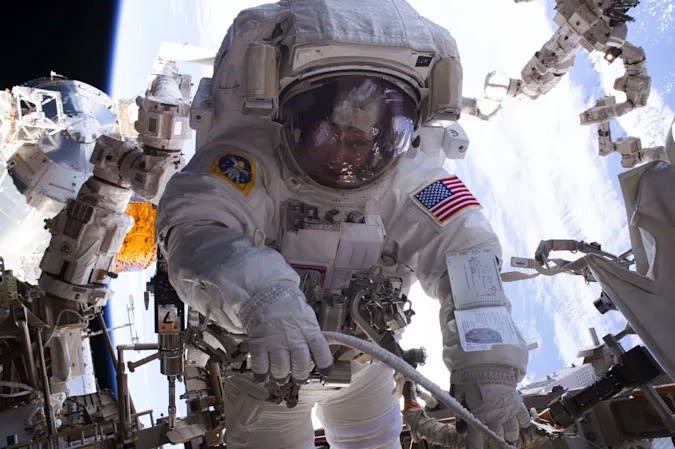 Apple has finally closed a loophole in the US that allowed most buyers to claim education pricing, even if they weren’t actually a student or a teacher. First noted on Reddit, the US Apple Store now requires buyers to verify their status via UNiDAYS to be able to purchase MacBooks, iPads and other devices from its education portal. The change appears to have happened over the past few days.

I’m based in the UK, where Apple has long required proof through the UNiDAYS platform to nab that often substantial discount on some of the company’s priciest devices. For legitimate students and teachers, you’ll have to click through to the UNiDAYS’ partner page for Apple first and sign in before you get to those discounts. Not that anyone can go too crazy: shoppers are limited to one desktop, one Mac mini, one laptop, two iPads and two accessories per year. Still, that’s a lot of Macs.

In space, your body destroys more blood cells than it makes.

A new study has found that “space anemia” caused by weightlessness in space is not a temporary issue as once thought, the CBC has reported. “As long as you are in space, you are destroying more blood cells than you are making,” said the University of Ottawa’s Guy Trudel, who led a 14-astronaut study carried out by the Canadian Space Agency (CSA).

The researchers said anemia could even be an issue for space tourism. The study also noted that “current exercise and nutritional countermeasures of modern space travel did not prevent hemolysis and post-flight anemia” in the astronauts tested.

Autopilot was apparently engaged at the time of the crash.

A Tesla owner is facing the first felony charges filed against someone using a partially automated driving system in the US. The defendant, Kevin George Aziz Riad, was driving a Model S when he crashed into a Honda Civic at a California intersection in 2019. It ended up killing the Civic’s two passengers. The National Highway Traffic Safety Administration (NHTSA) recently confirmed the vehicle’s Autopilot mode was switched on at the time of the crash. The NHTSA formally opened a probe into Tesla’s driver assistance system in August last year following a string of 17 people killed in 11 crashes involving parked first responder vehicles.

Verizon expects to hit over 1,700 cities this month, but AT&T’s rollout is more limited.

After a six-week delay — and no availability near many airports for the time being — people in some areas of the US will have access to C-Band services starting today.

Affected users will need to move to a paid Workspace plan.

First, it was Google Apps, then G Suite and now it’s Workspace. During all those name changes, Google offered new subscription plans while doing away with older ones. It now plans to sunset a tier that had survived the suite’s most recent rebranding.

In an email spotted by 9to5Google, the company told Workspace administrators it won’t offer G Suite legacy free edition as of July 1st, 2022. This doesn’t necessarily mean you have to start paying for GDocs. If you’re using Gmail, Docs, Sheets and the rest through a free Google account, you won’t be affected by the move. Google will continue to offer free Workspace plans to nonprofits and schools that qualify for its Fundamentals tier.

The eStream helps tow itself.

According to Autoblog, Airstream’s Thor brand has revealed an eStream concept self-propelling camper. The dual-motor trailer not only reduces the burden on the towing vehicle but can be remote-controlled from your phone to help you hitch up, reverse or simply move camp site. You can even use the motors to shift the weight distribution, so you might not need a special hitch.

Play some big-name Android titles on your PC.

You can now play Google Play Games on Windows — if you live in the right country. Google has launched registration-based beta access to “popular” Play Games titles on Windows PCs in Hong Kong, South Korea and Taiwan. Google said it would offer details of later betas and expansions “soon.” It previously committed to a generic 2022 rollout.

It’s an expensive controller, though.

Whether it’s Xbox Cloud gaming, Stadia, PlayStation Remote Play or just a very severe addiction to , gamepads are a better way to play many games on your smartphone. Normally that means using some kind of smartphone clip, but there are several options now that snap directly to your phone. The $100 is a single-piece controller that extends to fit your iPhone and plugs directly into it.