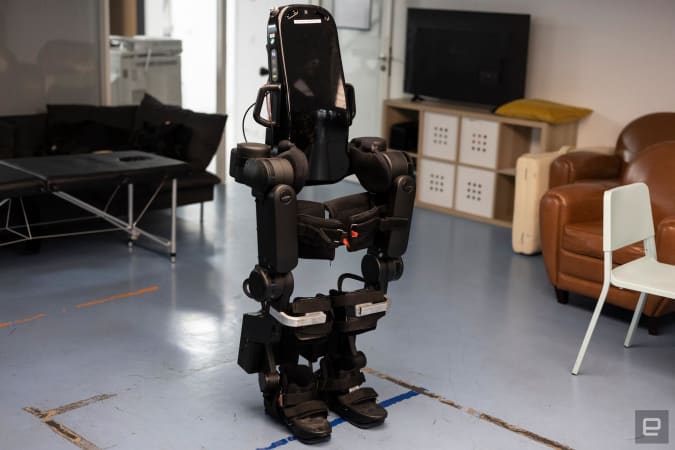 Researchers created a sticky drone to…

Paris-based Wandercraft has announced that it’s latest “Atalante” exoskeleton has been updated to give paraplegic and other patients a more natural gait during rehabilitation exercises. It also received a Medical Device Regulation (MDR) certificate in Europe, allowing patients and medical staff to use the device more widely. Finally, it’s taken a step closer to personal exoskeletons with additional funding.

The last time I saw Wandercraft’s first-generation exoskeleton was over four years ago, which is ages in the field of robotics. However, I recently got a chance to see the latest model in use with paraplegic patients, and chat with them and the team behind Atalante.

Exoskeletons (or exos, as they’re called in the industry) are powered “wearable robots” adapted to each user, designed to aid in walking rehabilitation treatments and restore a patient’s mobility. Atalante is Wandercraft’s second-generation exo with a more advanced design and features than the original model. It comes with a remote to operate it and a new app that lets a physiotherapist and patient fine tune movements and exercise programs. It uses two sets of removable batteries that allow for continuous use.

The new model is much smaller, more streamlined and more comfortable for patients, thanks to new hardware, tweaks in the fit and more intelligent software. It’s now self balancing, so it’s easier to control for both patients and physiotherapists. Although it’s not yet approved to be used alone, Wandercraft showed me a video demonstrating that it can self balance, even when shoved off kilter. It also offers features that make it easier to get in and out, along with the “Wander Balance” feature that allows for easy “verticalization” to help the patient stand up.

The device automatically generates optimized and adjustable kinematics according to a each patient’s morphology, with the settings allowing for custom exercises. The latest feature is “RealGait” (shown above) which allows for physiological walking with adjustable speeds. “CustomGait” allows the pace, step length and mass center to be changed, while “ActiveGait” lets the user change the assistance effort from 0 to 100 percent. That feature also includes an “EarlyGait” setting for first steps, along with the new RealGait setting.

Those features, plus smaller changes make Atalante far more useful. “We’ve improved half turns so they happen on a spot rather than taking up a lot of space,” Wandercraft CEO Matthieu Masselin told me. “We’ve redesigned things like the attachments and padding. That allows the patient to get in an out more quickly, move more comfortably and get more walking done in each session — which means more rehabilitation and re-education benefits.”

All of that is enabled by numerous sensors and software that can make adjustments on the fly, Wandercraft told me. The device’s “sense of balance” makes the various gait patterns possible, while also giving the patient and physiotherapist confidence that the device (which is still not light at 130 pounds) won’t tip over.

Wandercraft allows some patients to use Atalante for rehabilitation purposes and I saw it in action with Arbiha, a paraplegic patient who has used it for multiple sessions. The device was suspended from the ceiling and operated by a physiotherapist for safety reasons, but the plan is to one day have a version that can be used in the real world without assistance.

It was striking how easily she was able to walk during a relatively long one hour session. The exo therapy offers some clear benefits like stimulation of the cardiovascular/lymphatic systems and training for the arms and other supporting muscles, but it goes well beyond that.

“It boosts both my body and my spirits,” Arbhia told me. “It gives me a cardiovascular workout that I couldn’t get otherwise. Being upright for a fairly long period of time helps my balance, too, as you lose that aspect when you don’t stand up. I have a digestive malady and the walking therapy has also helped stabilize that, which is something I didn’t expect at all.”

Wandercraft’s eventual goal is a personal exoskeleton that can be used as an assistance device at home or in the streets. To that end, the company just received $45 million in financing to help it fulfill that “mobility for all” mission. “With the team we have, the financing we’ve received and the technology developed, we’re confident that we can one day have our exos on the streets and in people’s homes,” said Masselin. “But we still have a lot of work to do.”

Deloitte: Some, but not all, chip shortages will ease in the second half of 2022