Why airlines and telecoms are fighting over the 5G rollout 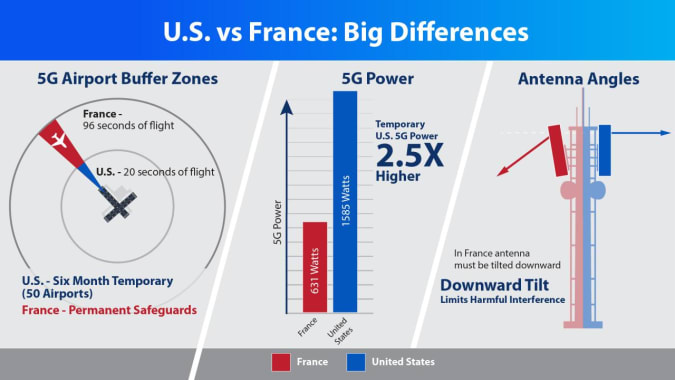 Rollouts of new wireless technologies and standards have not always gone well. When the GSM system debuted, it caused hearing aids to buzz and pop with static while early cell phone signals would occasionally disrupt pacemakers. Today, as carriers expand their 5G networks across the country, they are faced with an equally dangerous prospect: that one of 5G’s spectrum bands may interfere with the radio altimeters aboard commercial aircraft below 2,500 feet, potentially causing their automated landing controls to misjudge the distance from the ground and crash.

Sticking the landing is generally considered one of the more important parts of a flight — which is, in part, why you never hear people applaud during takeoff. As such, the FAA, which regulates American air travel, and the FCC, which controls the use of our telecommunications spectrum, have found themselves at loggerheads over how, when and where 5G might be safely deployed.

5G is shorthand for 5th generation, referring to the latest standard for cellular service. First deployed in 2019, 5G operates on the same basis as its 4G predecessor — accessing the internet and telephone network via radio waves beamed at local cell antennas — but does so at broadband speeds up to 10Gb/s. However, because 5G can operate on the C band spectrum, there’s a chance that it can interfere with radio altimeters if within close proximity to airports, especially the older models lacking sufficient RF shielding.

“The fundamental emissions may lead to blocking interference in the radar altimeter receiver,” a 2020 study by aeronautics technical group RTCA, observed. “The spurious emissions, on the other hand, fall within the normal receive bandwidth of the radar altimeter, and may produce undesirable effects such as desensitization due to reduced signal-to-interference-plus-noise ratio (SINR), or false altitude determination due to the erroneous detection of the interference signal as a radar return.”

So when the FCC sold a range of C band in the 3.7 GHz to 3.98 GHz frequency range last February for a cool $81 billion, the airline industry under the umbrella of Airlines for America (which represents American Airlines, Delta, FedEx and UPS) took umbrage. These concerns prompted the FAA to issue a warning about the issue last November and led Verizon/AT&T to push back their plans to launch 5G service on C Band by a month.

This warning, in turn, prompted the CTIA (the wireless industry’s main lobbying arm) to file its counterargument shortly thereafter, asserting that aircraft already safely fly into and out of more than 40 countries that have broadly deployed 5G networks, such as Denmark and Japan. “If interference were possible, we would have seen it long before now,” CTIA President, Meredith Attwell Baker, insisted in a November Morning Consult op-ed.

However, those countries have also taken steps necessary to mitigate much of the potential issues, such as lowering the power of 5G cell towers, moving towers or simply pointing their receivers away from landing approaches.

What’s more, a causal relationship between the 5G rollout and misbehaving altimeters has yet to be established.

“The C-band is closer to the frequencies used by airplane altimeters than previous 5G deployments,” Avi Greengart, lead analyst at Techsponentia, told Tom’s Guide. “In the US, the 5G we’ve been using has either been used before for prior wireless networks, or it is on really high frequencies with no ability to penetrate a piece of paper, let alone an airplane.”

“There is a 200MHz buffer zone between C-band and altimeter frequencies, and the part of C-band that is opening up this week is even farther from that point,” he continued. “Additionally, similar frequencies are already in use in Europe with no problems observed. If the airplane’s altimeter filters are working properly, there should be no interference whatsoever.”

Despite the CTIA’s efforts, the FAA (along with Transportation Secretary Pete Buttigieg) in late December requested Verizon and AT&T delay their primary rollout by two weeks, starting on January 5th and extending to January 17th, to give the government time to further investigate the issue. Unsurprisingly, those complex issues were not resolved within the given time frame, causing the airline industry to look towards the supposedly falling heavens and Chicken Little even harder.

In a letter obtained by Reuters, Airlines for America argued the skies would be beset by utter “chaos” amid “catastrophic” failures if 5G were deployed, potentially stranding thousands of passengers overseas. “Unless our major hubs are cleared to fly, the vast majority of the traveling and shipping public will essentially be grounded. This means that on a day like yesterday, more than 1,100 flights and 100,000 passengers would be subjected to cancellations, diversions or delays.”

“We are writing with urgency to request that 5G be implemented everywhere in the country except within the approximate two miles of airport runways as defined by the FAA on January 19, 2022,” the airline CEOs leaders argued. “To be blunt, the nation’s commerce will grind to a halt.” The airlines also objected to potential incurred costs related to better shielding their avionics (which helped alleviate the previous issues with hearing aids).

For its part, United Airlines told Reuters that it faces “significant restrictions on 787s, 777s, 737s and regional aircraft in major cities like Houston, Newark, Los Angeles, San Francisco and Chicago.” That’s about 4 percent of the carrier’s daily traffic. These restrictions would apply to cargo aircraft as well as passenger planes, which will likely further exacerbate the nation’s current supply chain woes.

The FAA has conceded that 5G cellular technology could potentially cause issues but stopped short of the airline industry’s apocalyptic predictions. “Aircraft with untested altimeters or that need retrofitting or replacement will be unable to perform low-visibility landings where 5G is deployed,” the agency said in a statement, directing airlines that operate Boeing 787s, for example, to take extra precautions when landing on wet or snowy runways as 5G interference could prevent the massive airfcraft’s thrust reversers to fail, leaving it to stop using brake power alone.

AT&T is none too happy with the FAA’s course of action either. “We are frustrated by the FAA’s inability to do what nearly 40 countries have done, which is to safely deploy 5G technology without disrupting aviation services, and we urge it to do so in a timely manner,” an AT&T spokesperson said in a statement.

The FAA is already considering the airlines’ request for buffer zones and, on January 8th, released a list of 50 airports across the country where it plans to implement them. The agency also notes that it has cleared five models of radio altimeter to operate within low-visibility areas where 5G systems operate. These models are installed in more than 60 percent of aircraft flying in the US including the Boeing 737 – 777, Airbus’ A310 – A380, and the MD-10/-11.

“We recognize the economic importance of expanding 5G, and we appreciate the wireless companies working with us to protect the flying public and the country’s supply chain. The complex U.S. airspace leads the world in safety because of our high standards for aviation, and we will maintain this commitment as wireless companies deploy 5G,” Transportation Secretary Pete Buttigieg, said in a statement on Tuesday.

This leaves the FAA in a tight spot. With the two week delay having already expired, Verizon is moving ahead with its 1,700-city, 100 million-customer rollout. AT&T is doing so as well, though on a more limited basis in select parts of eight metro areas including Detroit, Chicago, Austin, Dallas-Fort Worth and Houston. The agency has pledged to continue to investigate the issue and regulate based on its findings though it has not yet disclosed what steps it plans to take next for doing so.

What we bought: a rice cooker whose greatest trick isn’t actually rice